Clarence Thomas and the Constitution 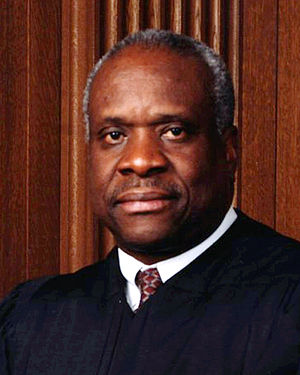 When John F. Kennedy said in his inaugural address, "Ask not what your country can do for you -- ask what you can do for your country," we heard his words with ears that had been conditioned to receive this message and hearts that did not resist it. We heard it surrounded by fellow citizens who had known lives of sacrifice and hardships from war, the Great Depression and segregation. All around us seemed to ingest and echo his sentiment and his words. Our country and our principles were more important than our individual wants, and by discharging our responsibilities as citizens, neighbors, and students we would make our country better. It all made sense.

Today, we live in a far different environment. My generation, the self-indulgent "me" generation, has had a profound effect on much around us. Rarely do we hear a message of sacrifice -- unless it is a justification for more taxation and transfers of wealth to others. Nor do we hear from leaders or politicians the message that there is something larger and more important than the government providing for all of our needs and wants -- large and small. The message today seems more like: Ask not what you can do for yourselves or your country, but what your country must do for you.

This brings to mind the question that seems more explicit in informed discussions about political theory and implicit in shallow political speeches. What is the role of government? Or more to the point, what is the role of our government? Interestingly, this is the question that our framers answered more than 200 years ago when they declared our independence and adopted our written Constitution. They established the form of government that they trusted would be best to preserve liberty and allow a free people to prosper. And that it has done for over two centuries. Of course, there were major flaws such as the issue of slavery, which would eventually lead to a civil war and casualties of fellow citizens that dwarf those of any of the wars that our country has since been involved in.

Though we have amended the Constitution, we have not changed its structure or the core of the document itself. So what has changed? That is the question that I have asked myself and my law clerks countless times during my 17 years on the court.

As I have traveled across the country, I have been astounded just how many of our fellow citizens feel strongly about their constitutional rights but have no idea what they are, or for that matter, what the Constitution says. I am not suggesting that they become Constitutional scholars -- whatever that means. I am suggesting, however, that if one feels strongly about his or her rights, it does make sense to know generally what the Constitution says about them. It is at least as easy to understand as a cell phone contract -- and vastly more important.

The Declaration of Independence sets out the basic underlying principle of our Constitution. "We hold these truths to be self-evident, that all men are created equal, that they are endowed by their Creator with certain unalienable Rights, that among these are Life, Liberty, and the pursuit of Happiness. -- That to secure these rights, Governments are instituted among Men, deriving their just powers from the consent of the governed . . . ."

The framers structured the Constitution to assure that our national government be by the consent of the people. To do this, they limited its powers. The national government was to be strong enough to protect us from each other and from foreign enemies, but not so strong as to tyrannize us. So, the framers structured the Constitution to limit the powers of the national government. Its powers were specifically enumerated; it was divided into three co-equal branches; and the powers not given to the national government remained with the states and the people. The relationship between the two political branches (the executive and the legislative) was to be somewhat contentious providing checks and balances, while frequent elections would assure some measure of accountability. And, the often divergent interests of the states and the national government provided further protection of liberty behind the shield of federalism. The third branch, and least dangerous branch, was not similarly constrained or hobbled.

Since Marbury v. Madison the federal judiciary has assumed the role of the interpreter and, now, final arbiter of our Constitution. But, what rules must judges follow in doing so? What informs, guides and limits our interpretation of the admittedly broad provisions of the Constitution? And, more directly, what restrains us from imposing our personal views and policy preferences on our fellow citizens under the guise of Constitutional interpretation?

To assure the independence of federal judges, the framers provided us with life tenure and an irreducible salary -- though inflation has found a way around the latter. This independence, in turn, was to assure our neutrality and impartiality, which are at the very core of judging -- and being a judge. Yet, this independence can also insulate a judge from accountability for venturing beyond the proper role of a judge. But, what exactly is the proper role of a judge? We must understand that before we can praise or criticize a judge. In every endeavor from economics to games there is some way to measure performance.

As important as our Constitution is, there is no one accepted way of interpreting it. Indeed, for some commentators, it seems that if they like or prefer a particular policy or conduct, then it must be constitutional; while the policies that they do not prefer or like are unconstitutional. Obviously, this approach cannot be right. But, it certainly is at the center of the process of selecting judges. It goes something like this. If a judge does not think that abortion is best as a matter of policy or personal opinion, then the thought is that he or she will find it unconstitutional; while the judge who thinks it is good policy will find it constitutional. Those who think this way often seem to believe that since this is the way they themselves think, everyone must be doing the same thing. In this sense, legal realism morphs into legal cynicism. Certainly this is no way to run a railroad, not to mention interpret the Constitution. . . .

Let me put it this way; there are really only two ways to interpret the Constitution -- try to discern as best we can what the framers intended or make it up. No matter how ingenious, imaginative or artfully put, unless interpretive methodologies are tied to the original intent of the framers, they have no more basis in the Constitution than the latest football scores. To be sure, even the most conscientious effort to adhere to the original intent of the framers of our Constitution is flawed, as all methodologies and human institutions are; but at least originalism has the advantage of being legitimate and, I might add, impartial.

I noticed that Clarence Thomas referred to Constitutional Rights and there is no such thing. Our rights were granted to us by our Creator, not the Constitution. He also indicated that the Justices of the Supreme Court have life time terms. This is not entirely true. The Constitution indicates that they serve during periods of good behavior. I believe that when a Justice strictly obeys the Constitution he or she is eligible to serve, but when they begin to to pervert the original intent of the framers, they violate their oath to preserve, protect and defend the Constitution and are demonstrating bad behavior.