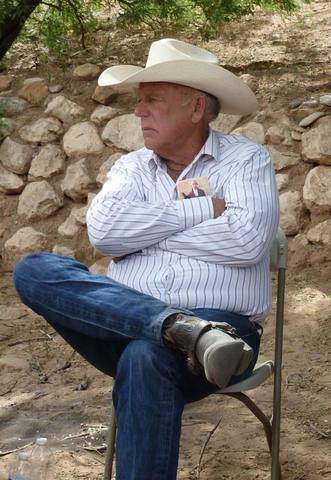 After spending nearly two years in prison for a crime he didn't commit, he was granted a pre-trial release. Rather than accepting this offer he refused to accept his freedom until all of the men still incarcerated who rallied to support the Bundy family in April of 2014 are released on bail.

I don't think there are many Americans with more integrity and courage than Cliven Bundy. He is a man who loves America and the principles upon which our nation was founded. Even though defendants are presumed innocent until proven guilty, Cliven has not been found guilty of any crime and yet he has been unlawfully incarcerated of 647 days. What ever happened speedy trial guaranteed in the Constitution. He has been denied bail and treated as though he has been convicted of a crime.

I think that President Trump should shut down the Bureau of Land Management or he should appoint Cliven to be the new director.

Amen to that and wouldn't that be perfect justice!

So appallingly unjust. The BLM is part of the gigantic swamp which should be drained/severely reformed. Wish Trump could act faster, but there is only so much one man can do, especially when blocked at every turn by swamp creatures in his own party.

AMEN, to all of that! LaVoy Finnicum should also be enshrined in the public consciousness! they deprived him of his life! Bureaucrats with regulatory authority, with little to no oversight, assume for themselves power, that exceeds the obscene. They employ, at taxpayer expense, a posse of tin horn drugstore cowboys and trample the rights of  honest, honorable and God fearing, hard working and liberty loving citizens. It is absolutely a mockery of The Constitution and is morally reprehensible.

Donations to The Bundy Defense Fund, large or small, are certainly needed!