Convention of the States 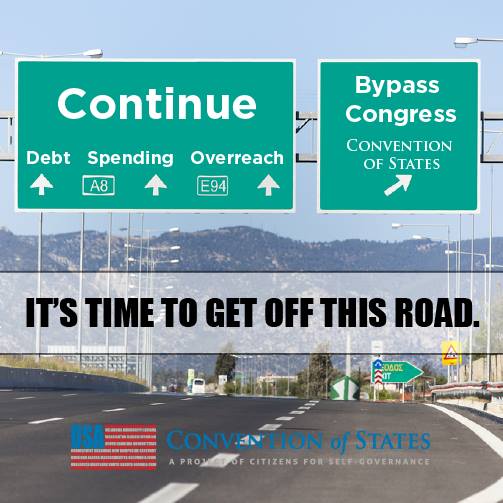 When the states created the Federal Government they established a employer- employee relationship. In order to maintain this relationship in Article V the states reserved the right to propose amendments to the Constitution. Without this provision it is highly unlikely that the Constitution would have ever been ratified.

The idea that the states would give the Federal Government the exclusive authority to propose amendments to the Constitution makes as much sense as delegating to your children the authority to change the rules governing your household.

We can not be expect Congress to propose amendments that would diminish their power and authority. Only amendments proposed by the states and the people can rein in the power of Congress.

",,, the states reserved the right to propose amendments to the Constitution."

That right exists even now with no need whatsoever for a "convention" to do it, which would put our entire Constitution at risk.

The culture today is so much more perverse and the strangle hold by the globalist rich and powerful is so much more intense at the State levels compared to 225 years ago.

Seeing what goes on politically at even the local level I would never risk having the States select delegates to represent the people in the face of such bribery and extortion sure to be attached. These delegates would not be folks like you and me willing to stand for what is right.

These appointed YES Men and Women would easily be coerced in a Convention of the States to throw it open to completely replace what we have and there would be no stopping it.

This power of the States should indeed be acted upon, but issue by issue, amendment by Amendment not in a Convention where any and everything can be put on the table.

The ministers of evil, the monied powers that be have been pushing for such a Convention for decades. We cannot let that happen or we can kiss our Constitution (or what is left of it) "Goodbye".

The Convention would not put the Constitution at risk, but it would threaten the survival of the crime syndicate in Washington DC.

If the states created the government they have an employer-employee relationship with the Federal government. Shouldn't the employer have right to propose changes in the laws that govern his employees/

The Patriots of the American Revolution did not fear the negative possibilities and neither should we. Whenever there is a risk there is a reward and If we don't put our government back in their Constitutional box we will not survive as a nation.

Which brings us back to the elephant in the room ... even if we could trust our neighbors to vote for someone who was responsible rather than greedy, the vote counts are secretly tabulated in computerized machines so we would have the cart before the horse.

In fact, the people in general today, if given the opportunity would primarily vote for handouts and have no problem in their conscience sticking their hands into other people's pockets. Our forefathers had a hard working much more honest culture in their time.

That's not being ruled by fear. That is a cold stark reality. Fortunately, the Constitution, even degraded as it is, protects the rights of the individual over the mob. Changes are forced to happen slowly.

That change needs to begin with teaching in the home by the parents rather than the State. Shoot, they haven't taught civics classes in decades.

Then our neighborhoods need to open/transparent vote for honest and wise civic leaders in every precinct to begin to change the culture.

We can reassemble the Constitutional box one Amendment at a time, but that needs to include the States introducing them. We do not need a Convention to do that. Right now, hardly any of the State representatives elected 'by the people' have a clue that the States have this right.

Sending this type to a Convention with the intention of bringing us home a show horse would surely get us a goat ... one which would eat up everything. The changes we need must be done in a way where there is zero risk of it backfiring. It can be, but a Convention is almost assuredly a guaranteed end of it all.

Your and my neighbors, even in an honest vote, would not be sending you or me to such a Convention. They would be sending those who promise them the most goodies at the expense of everyone else.

I wouldn't trust a Convention of the States in this day and time as far as I can spit. Again I do not call that fear, but rather, wisdom.

The representatives on the people in the states can get together to discuss the problems and potential  solutions. They have been vested in the Constitution to propose amendments to the states for their consideration. We know that the historically conventions of the political parties cause us to fear a convention. Perhaps we called the gathering a Meeting of the States to Restore America.