In order tor a crime to take place they must first create a victim. The individual accused of a crime must violate the life, liberty or property of another individual. One of the rights mandated in our Bill of Rights is that a person accused of a crime has the right to cross examine the witnesses against him. In other words, the defendant has a right to confront the injured party.

If there is no injured party, and hence, no one to cross examine, the individual accused of the crime cannot defend himself in a court of law.

A government is a legal fiction and has no rights and cannot be an injured party. Only human beings have rights. Individuals can testify against an accused person but a legal fiction cannot. When an unjust law is enforced, the accused individual becomes a victim.

"In all criminal prosecutions, the accused shall enjoy the right to a speedy and public trial, by an impartial jury of the state and district wherein the crime shall have been committed, which district shall have been previously ascertained by law, and to be informed of the nature and cause of the accusation; to be confronted with the witnesses against him; to have compulsory process for obtaining witnesses in his favor, and to have the assistance of counsel for his defense."

Ninety-eight percent of the people in prison were denied their right to a trial by a jury. In order to avoid the possibility of being convicted of a more serious crime the accused pleads guilty to a lesser crime. In many cases they have committed no crime at all. This practice is an enemy of justice and a great way to raise money for corrupt lawyer and judges.

In the land of the free, we have more of our people in prison than any other country in the world. The biggest crime today is that we incarcerate people for committing victimless crimes. 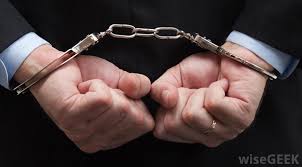 A crime has been committed only when the life, liberty or property of one human being is violated by another human being. In order for a crime to take place there must be both a victim and a person responsible.

We have a God given right enumerated in the Fifth Amendment that guarantees those suspected of a crime will have the opportunity to cross examine the witnesses against them. When there is no victim there is no one to testify against the accused.

Only individuals have rights and artificial persons such as corporations can not testify in a court of law.

When people violate a rule, regulation, code, ordinance or statute they have not violated the law and have not committed a crime.

I'm reading a lot of great ideas, here and only have this to offer... Shouldn't the focus be narrowed to first things, first?

I say get rid of the Fraudulent Reserve and scrap the debt based system!

Returning to Common Law and reducing the mammoth size of "the government beast" may take a day or three.

The Ship of State must be righted, if The Republic is to survive, but we will not be able to accomplish what has to be done by going off in every direction at once.

I believe I have uncovered the first thing as you put it.

Using a philosophy called "Republic Review"; (that is, the right of each state to review its "contract" with its co-creation, the Federal Government.), I believe we currently have over ten thousand vacancies existing in our House of Representatives.

So, the first thing we should do is an immediate demand from the people in every state, that;

"When vacancies happen in the Representation in any State, the Executive Authority thereof, shall issue writs of Election to fill such Vacancies"

So click on the link and tell me what you think.

The Pledge of Allegiance To The Natural People of America

1.     I pledge allegiance to the natural principles that all men are created equal, that they are endowed by their Creator with certain unalienable Rights, and that among these are, but not limited to; Life, Liberty; and the Pursuit of Happiness.

2.     I hold further that our Body politic/Government was only created/instituted among Men to secure our natural inalienable rights to Life, Liberty and the Pursuit of Happiness, deriving their just Powers from the consent of Americans, and that whenever any Form of Body politic/Government becomes destructive of these ends, it is the Right/Duty of every American to alter or to abolish it, and to institute a new Body politic/Government, laying its foundation on such principles as stated in the first paragraph and organizing its powers in such form, as to them shall seem most likely to protect the Rights to Life, Liberty and the Pursuit of Happiness for all Americans.

The Pledge of Allegiance To The Natural People of America.

1.     I pledge allegiance to the natural people of America and the principal that all men are created equal, that they are endowed by their Creator with certain unalienable Rights, and that among these are, but not limited to Life, Liberty and the Pursuit of Happiness.

2.     I hold further that our Body politic/Government was only created/instituted among Men to secure our natural inalienable rights to Life, Liberty and the Pursuit of Happiness, deriving their just Powers from the consent of Americans, and that whenever any Form of Body politic/Government becomes destructive of these ends, it is the Right/Obligation of every American to alter or to abolish it, and to institute a new Body politic/Government, laying its foundation on such principles as stated in the first paragraph and organizing its powers in such form, as to them shall seem most likely to protect the Rights to Life, Liberty and the Pursuit of Happiness for all Americans.

Of course there is no crime if there is no victim. The problem we have is understanding, not just who we are, but who they presume us to be. As we know, government is a legal fiction and cannot answer as the corpus delecti. This government, established after the civil war, replaced our de jure government and it has a whole different purpose.

Its purpose is to be in a perpetual state of bankruptcy for the benefit of the international bankster/Vatican Cabal where codes, statutes, regulations, rules, etc. are taught as 'laws' but are, instead, nothing more than public policy under bankruptcy. They talk about rights under the Constitution but which Constitution are they referring to---the de jure or the de facto? Does the de facto provide any remedies for the living man?

The current system is based on the fact that it is foreclosing on the bankrupt entities posing as legitimate government--both federal and federal sub-corporations [the state governments]. The administrative court system is the tool for extracting the wealth of the country through the use of straw men attached to the living without their knowledge or consent. Their system of registration [registration always conveys legal title to the state] provides a means for taking what the living have worked for by transferring ownership from the living to the fictional straw men through registration. Has anyone ever seen their Christian appellation on a court docket [or the deed to his property or the certificate of title to his automobile]? I would say not, unless you have been successful in invoking a judicial court.

Just try demanding your 'rights' in one of their administrative courts and see what happens. They will do just about anything to conceal the fact that, you, the living, have no protected rights in their star chamber proceedings. You are never seen as a living man in their proceedings. You are seen as an actor 'appearing' as the fiduciary for their straw man--the party charged with some infraction of public policy. Living men don't appear, they are present.

They get away with all of this because of our ignorance. They get away with this because we don't recognize the status we have silently agreed to by 'appearing'. We become liable for the charges against the straw man because we fail to rebut a fiduciary/surety-ship relation with their Straw man.  They extract our wealth for thousands of victimless so-called crimes in order to transfer our energy to the Cabal's side of the ledger.

Unless we have made their straw man our debtor under our right of subrogation by proper filings [Yes, Virginia, they do offer a remedy] and know how to utilize that status we will continue to be serfs on the U.S. plantation.

That is the perhaps one of the most accurate and concise descriptions of EXACTLY what is REALLY happening in America and all over the world today, for it is not just America that is owned and run by the Rothschilds and their handlers, (the Bank of London, The Crown and The Vatican), it is also 189 other countries as well. There are only two left.

This is all old news since 1995 you are still talking about the symptoms and not the cause.

In South Carolina I tried fighting against victimless crimes many different ways to no avail.

It brings the State in billions in revenue.

I maintain that citizenship, residency and persons are dangerous categories to hang your hat on precisely because they are a manipulable categories. Citizens and noncitizens, Residents, non-residents and persons non-persons are not beings found in nature; they are made and unmade by way of statutory law and politics, and their making and unmaking can have momentous consequences.

So how do we get the State Corporation to recognize non-statutory human beings?

This is the cause.

What is the Cure?

So have they lumped every one into a corporate status?

We need to find out with FOIA requests if possible.

How many here have actually fought in court?

But I'm not going to quit fighting.