Just Say No to Incumbent Politicians 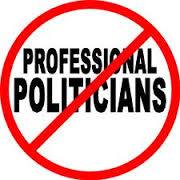 Yeah, men in robes with God complexes...given an inch, taken miles and miles...corruption, greed and treason... "the new normal."

Your remedy, The Convention of States, was attempted in 1787.  However, it ended with the 'overthrow of the Articles of the Confederation' which can only be identified as a Coup d’état, if you will, and resulting in a brand new, and QUITE different, form of governance aka The Constitution of the United States of America which gave the government several enumerated powers. You know the ones they keep ignoring!  From the 70 appointed delegates 15 were unable to attend, while a few others left out of disgust/health or personal matters leaving 55 to remain, however only 39 signed the new Constitution.

"[Black’s Law Dictionary defines “constitutional convention” as “a duly constituted assembly of Delegates or representatives of the people of a state or nation for the purpose of framing, revising, or amending its constitution.” The term “Convention of States” implies State control over a convention. But the earliest use of the term we've found was Nathan Dane’s motion in Congress on Sept. 26, 1787 in reference to the 1787 constitutional convention which rewrote the entire Constitution.]"

If Washington, DC cannot 'fix itself' now what makes any reasonable person believe giving D.C. more amendments to trample upon as they fight for lobbyist $’s all the while feverishly working to pass new Anti-American bills, see SB 1241 & SB 1313, to severely limit your use of your own cash/ASSETS making criminals out of what's left of us in the process?

Apparently, the WHORES will usurp ANYTHING you put in front of them!

A sterling example of a great statesman.. Dear Gov. Abbott - the one that appointed the last 2 TX S.O.S’s both being illegal alien mexican nationals (possibly 'daca' recipents) wants '9' new amendments,  (See Gov. Greg Abbott), and is joined at the hip with the illustrious illegal alien Raphael Eduardo, Ted’ ex-Canadian (who renounced his Canadian birthright citizenship 2014) Cruz, and Marco Rubio who thinks you can run for POTUS even if you’re not a NBC.  How many amendments does your state want?

If the convention of states is successful in their attempt at the 2nd Coup d’état they will certainly implement the following pre-written Constitution:

The proposed Constitution for the New States of America is HERE

Since the States created the federal government, they are the final authority on whether their creature has violated the constitutional compact the States made with each other. Those are our Framers’ words – you can find them HERE and HERE.

Why would we even suggest the current Constitution, an inanimate object, be amended, yet again, when IT isn't at fault? That idea is tantamount to amending your marriage license because one party was unfaithful!  I don't get that logic!  Whatever happened to just saying 'Not just no, but Hell NO'.

Yes, it's up to the states (us) to stop this madness, but by all (of us) standing up to the 'Creature', it's handlers (the traitors within), and to our state legislators (the other traitors within) as well.   WE can’t keep asking the traitors within to ‘help us’ out of a situation they created.  This is a matter for We, the people, to address however method that might be.

And no doubt a few reasons Patrick Henry stated re the Constitution, he smelled a rat.

"If a wrong step be now made, the Republic may be lost forever.   If this new government will not come up to the expectation of the people...their liberty will be lost, and tyranny must and will arise."

"What right had they to say, We, the People, instead of We, the States" ...The people gave them no power to use their name."

If you don't already know this information just watching this one video you will be amazed.

Just to clarify your statement a little,

"They", who are alive today, didn't "create" the problem, but "they" are most certainly actively participating in it.

And I wonder if you are an active member of COS.

It appears our country is like an onion .. one layer (of fraud) is built upon the previous one (layer of fraud) , and so on, and so on.

I'm from the school of 'when you know better you do better'.  I don't see that happening in politics.  We hear their pretty sounding little words, vote them in, and immediately they turn sour on us.

If those alive now didn't create it, then who is perpetrating all this evil I feel emanating form the government?  Who is actively creating SB 1313 & 1241?

WONDER NO MORE .. No, I am neither active/nor inactive member of COS as I do NOT believe in IT.  I have mentioned several times the 'illegality' of Ted Cruz's SenatorShip, with barely little commentary from anyone in this group.  When he threw his Canadian hat in the ring riding to an easy victory backed by the Tea Party I fought it tooth and nail, but they (Mark Meckler et al) were successful in getting yet another illegal alien foreigner into one of our highest offices.

WHY isn't there anyone else as concerned as I am about the Freaking Blanking Canadian 'Teddy, wannabe a Camelot Kennedy' sitting in the 12 th district senate chair representing the Once Great State of TEXAS?

If you, or anyone are active members of COS could you please ask Mark why he/they promoted this illegal?

Yes, wasn't he and Jenny Beth Martin Co-founders of the 2009 Tea Party?

The problem is, committing fraud is a legal conclusion that unfortunately is left up to corrupt courts to determine.  While there are numerous SCOTUS cases related to vitiation of all by fraud, you have to prove fraud and the so-called courts routinely ignore fraud because they are committing fraud (and treason) themselves. Indeed, corruption and fraud is the "new normal" for all "three branches of government" and society in general.  Very difficult to make chicken salad out of chicken s*&^.

Not sure whether you're speaking of fraud in general as a 'new legal process (SOP), or protocol' for government, or Teddy!?!

All of the above.  I've experienced it first hand in the cases I've been involved in.  These so-called "judges" are disgusting in condoning lying lawyers and their clients' (and perpetrating their own) fraud.

There is a reason for their fraudulent schemes which are not really fraudulent at this point as they do NOT work for us. They work for one of the '3' different governments. Actually, they work for the government based in Manhattan which under the Netherlands.  Sigh!

Having listened to the above video on YT channel "The Government of The United States of America" I have see the 'errors' of our ways.  I knew there was a Coup d'etat in 1787, and they explain just what happened.  They have resurrected the 'Articles of the Confederation'.  It's still quite new to me, and is like speaking a foreign language, but they explain how we the people, unless you are part of the government, masonic, are Stateless.

and no I am not 'impaired in any way'.