Life on the Plantation 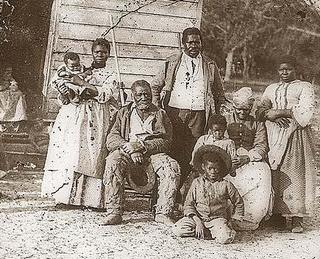 Virtually every American has become a new kind of slave created by contracts with the Corporate United States. Without our consent "We the People" have been fooled into entering a series of adhesion contracts that make us subjects to the jurisdiction of the government. Ironically the government that was created to protect our rights has stolen the sovereignty of the people and made us all slaves.
The unalienable rights spoken of in the Declaration of Independence have become nothing more than privileges granted to us by our Masters. "We the People" were once free to exercise the rights granted to us by our Creator, but have seen our status reduced from sovereign citizens to human chattel. In the Declaration of Independence it was stated that when our government begins to abuse us, it is our right and duty to alter or abolish it.

I think we can all agree that our government is broken. The time has come for us to fix it. We can either trust our elected officials who broke it, to fix it, or we can dismantle our current government and replace it with one that will better serve the people. If you don't mind being a slave, just sit back and do nothing and before you know it, you will be a 21st century slave on the government's plantation.

Yes, we all know that the above is correct, but does anybody know what to do and how to change it ?

By all means, where can I get this free tax statement?  I've been dealing with the IRS goons for the past 4+ years.  Getting the runaround and having my personal property stolen from me through illegal levies. - Chris

I am afraid it will take a knock down, drag um out revolution to change our current situation. It will be brought on by some terrible "happening" in this country to get people to sit up and take notice.....a call to arms so great, that the people will just not take it anymore. Just exactly what that will be is anyones guess.

Perhaps it will be soon, so we don't lose anymore of our precious freedoms. Keep on "prepping" we all know that day is coming.

US Government Rolls Out Mandatory Adult Vaccination and Tracking Program

This month, federal health officials are rolling out a national adult immunization plan that contains a new Mandatory Adult Vaccination1,2 and Electronic Tracking Program. The government is urging Americans to fulfill their obligation to support and comply with the anti-choice requirement to relinquish responsibility for personal health and well-being to federally appointed health officials through pharmaceutical enhancements.

Public health officials will be monitoring Twitter and Facebook posts for anti-vaccine chatter that may indicate non-compliance with federal vaccine recommendations and state vaccine mandates.

"The measles outbreak in Disneyland is a prime example of how Americans are incapable of protecting their own health and making wise health choices,” said a spokesman for the federally sponsored Anti-Choicers United Campaign.

"We are delighted that every state has pledged to move forward on bills to eliminate vaccine exemptions and support mandatory vaccine compliance, and we remind Americans that failure to vaccinate is a serious biothreat that simply will no longer be tolerated.”
welcome to April 1 2015
http://articles.mercola.com/sites/articles/archive/2015/04/01/manda...

Amusing April Fool's article. But we can see this happening very soon.

Has anyone read the thousands of pages in the Affordable Healthcare Act? Somewhere around page 100-something, there was partial description of how all of us will receive an RFID chip or medical device in 2012 or 2013. It didn't happen by the timeline because of the public backlash that the legislation is, and still is, taking. But it's still in there. If Americans only knew, the entire Congress and the Health and Human services department would be abolished.

The legalease wording and following the paper-trail of the medical device description, and who has the authority to make it happen is the difficulty. The full definition jumps around the document several times before we really discover what it says. It's hidden in plain sight IF we read it like an attorney.

I had an in-person discussion about these RFID chips with my state representative long before the ACA legislation came out. The federal gov't has been pushing for it in MY state drivers license for years and my state has kept them at bay. Funny how this guy wasn't re-elected.

Those TWO facts alone prove to me that someone is Hell Bent on getting their way. I can imagine the false-flag epidemic scaring everyone into being vaccinated for our own good. They WILL get  ALL the children, the next generation, because vaccinations are mandatory to go to school. It's already a legal precedent. Will they use this opportunity to ALSO insert a chip? (Not to go too far off-topic, but can we imagine why there is such an attack on homeschooling? Homeschoolers ARE on the DT list. Why?)

Feels like a plantation, or being serial numbered, or barcoded like livestock. Doesn't it? We've seen this movie before.

Welcome to The New World Order!

The true 13th Amendment was the Title of Nobility Act, and it was duely ratified.

However, J Q Adams always wanted to be a nobleman (understudied Nobility in Europe - sent by John Adams).  So as SOS (kinda like Kerry) managed to hood wink and bypass the act, even though it is published in many State Law Books (See TONA on Web) as having been ratified and did not go away until the 1850s+.

Then the second 13th failed in early 1860's, with the 13th that is on the Books as now published.  However, to get the 13th passed, the Northern Brand of the House and Senate had to accept the southern Congressional Members back into chambers to pass this act.  End of Civil War.  No, the same bastards in Congress that welcomed the Southern Congressmen back to chambers dismissed them as being illegal immediately in order to get the 14th and beyond passed which are now illegal.

So all the BS we get from Congress is simply because we do not have a legal Congress.

Even the Tax Amendment is illegal.  To make matters worse, when the Bush Dynasty came into play (back in the CIA Hay Days) many illegal laws are on the books that make you the slave.  Please do not sit back and be a slave on Uncle Sam's Plantation.  The bastards in Washington are out to get us -  example:

Labor Day in 2011, Hoffa and Obama gave a speech in Detroit.  Hoffa referred to Conservatives as a Sons of Bitches.  Obama laughed at my expense.  What was accomplished that day is that it is now Politically Correct to refer to the current congress and Executive Branch employees as sons of bitches - after all, their leader sanctioned conservatives as a joke.  SO, jokes backfire frequently.

Say hello one day with an email to Sons of Bitches in Washington. I read one posting on Internet whereby one individual sent 7000 emails to government email accounts (all of Congress included) asking were there any Sons of Bitches along with him.  He got 7 responses out of 7000  stating they would welcome being called Son of a Bitch along with the writer.  The majority from State Level gibber-mint employees.

What to do about it.  I was perusing EO's by Bush, Clinton, Bush, and Obama.  After reading the above, I recall reading (on-line EO collection) an EO by George Bush Jr in early 2000+s.  He signed the EO as Bush, 43 President of <followed by a Roman Numeral --- which happened to be the Original Constitution of the United States.)  I do believe this is the only occurrence of this.

As Conservative Patriots; cannot the majority Declare that the Constitution as originally written is the Reigning Document of Law in the United States; and that there is no U.S. Inc, Constitution, or Washington D.C. United States Constitution that is worth toilet tissue grade?

Or is this too simple of a Solution?

Several groups are looking into the "original" 13th Amendment. I happen to have caught a boring YouTube video of  it being explained to a NH group of legislators. They voted last year to look into it, but don't know what has happened yet. I understand that there is a record of it being ratified by the required number of states at the time, and each state's archives has an original copy. It's for real! Only the federal copy is missing because of a mysterious fire during the war.

One testimony gave several examples of the "original" 13th Amendment being printed in historical schoolbooks for many years afterwards. Why would third parties know about it, and teach it, if it wasn't ratified? (Then we were given a federal department of education sometime later.)

Shortly afterwards, today's 13th & 14th Amendments, as we know them, were offered and no one is the wiser. From then on, we need to count the votes and check if a few other questionable Amendments were actually ratified. But that's another subject, with the same evil players. Where does this fit with the USA Incorporated slight of hand?

you need to read my entry into WRAM. as i tell it all.    http://wramsite.com/profiles/blogs/this-is-my-first-time

thats what they wish us to do . the dialectic is for them to make us see a psy-op made by them but  seemingly perpetrated by us  . What better way to control the optical but from their Play Station -3

Most of the people today are not only slaves in servitude, most are also enemy belligerents occupying conquered territory under the War Powers Act of 1933.  US citizens are under a government emergency status which removes any constitutional protections from government's actions perpetrated and controlled exclusively by the president giving him dictatorial power. All a president has to do is sign a proclamation to release the emergency status and the problem is that people have not been asking or demanding for such to take place.  I ask that you please read the following linked paper titled The War Powers Act of 1933.  The rare thing about this paper is the fact that it actually entails a remedy.