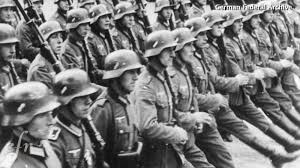 You be the judge. If a man or a woman is compelled by the government to serve in the mililtary does this violate the provisions of the 13th Amendment? Does military conscripton jeopardize an individual's God given right to life, liberty and property?

If a war is jusified, individuals will volunieer to serve in the military. With all of the modern weapons of mass destruction available necessity to draft men and women is unnecessary.

The Supreme Court unanimously upheld the constitutionality of the draft act in the the Selective Serivce Draft Law on January 7,1918. The decision said that the Constitution gave Congress the power to declare war and raise and support armies.

The war in Europe was very unpopular and the government needed to compel people to surrender rights under the 13th Amendment to raise the army.

In their system under their constitution [The Constitution of the United States] they don't conscript any of the people. They conscript the legal fiction straw men and we, acting as presumed fiduciaries for said legal fictions, go down and sign in. We VOLUNTEER to perform for the entity that is only on paper and cannot carry a gun. If you don't know who you are, who they are, and  how they use syntax to confuse the mind you are lost.

It also violates the Tenth Amendment, as properly understood. The power to raise an army is only the power to recruit and enlist volunteers, and pay them a salary.

So what is a militia callup? The militia are not the military. Different constitutional rules apply. Militia is only called up for the duration of an emergency, which is not supposed to last or years.

Today we have an all volunteer Armed forces, the dreft was agreed for by all 48 states at the time. The Government was powered by all 48 States. that was not a Federal government thing.

To raise and support Armies, but no Appropriation of Money to that Use shall be for a longer Term than two Years;

To provide for calling forth the Militia to execute the Laws of the Union, suppress Insurrections and repel Invasions;

To provide for organizing, arming, and disciplining, the Militia, and for governing such Part of them as may be employed in the Service of the United States, reserving to the States respectively, the Appointment of the Officers, and the Authority of training the Militia according to the discipline prescribed by Congress;

That was the original government. This government formed after the Civil War is owned by the international Bankster/Vatican cabal and is their primary weapon for bringing all countries on earth into the Cabal's control.

People don't understand that Lincoln wasn't elected. He was chosen. In the republican convention Lincoln was extremely low count but no one had enough delegates. The national committee then chose Lincoln. Lincoln declared martial law during the civil war and martial law was never lifted. That is why the military is still in existence.  The military supports the tyrannical federal government that had overstepped its bounds in conquering the southern states. This was a war for money not for slavery. The northern states needed the southern states to be forced to buy their high priced goods. If the people of the southern states chose to buy elsewhere they would have to pay the extremely high tariffs to the federal government. The bankers needed the trapped market.Andrew Jackson knew the evil of a central banking establishment and fought it. Someone should prosecute the central bank authorities and employees. pursuit to Constitution Section 8

5: To coin Money, regulate the Value thereof, and of foreign Coin, and fix the Standard of Weights and Measures;

6: To provide for the Punishment of counterfeiting the Securities and current Coin of the United States;

How does Congress pass that authority without  constitutional amendment?

As to a standing military; Jefferson said,

"Nor is it conceived needful or safe that a standing army should be kept up in time of peace for [defense against invasion]." --Thomas Jefferson: 1st Annual Message, 1801. ME 3:334

"Standing armies [are] inconsistent with [a people's] freedom and subversive of their quiet." --Thomas Jefferson: Reply to Lord North's Proposition, 1775. Papers 1:231