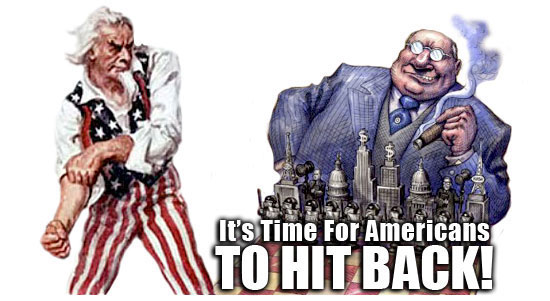 The government owns over 600 million acres of land. Congress could sell some of this land to fund the government instead of taxing our income.

Also, the government owns 70% of the stock in the Fortune 500 Companies. The government currently controls $146 trillion in assets and the yield on these assets if invested would be three times the amount of our annual budget.

Instead of paying for the cost of government by using these accumulated assets, they borrow money on the production of every American and raise our taxes to finance it, thus creating trillions in debt.

The government's total accumulated assets average $454,000 for every man, woman and child in the United States.

If the government simply used the money they have already, all forms of taxation would be unnecessary. The government could easily pay for health care and college tuition if they just used these accumulated assets.

We have enough money to pay off everyone's mortgage, (over 2.2 trillion dollars), and fund social security without having to tax the people. This sounds like socialism, but it is not. It is simply directing the government to use current investments  and the accumulated interest to pay for things which benefit all of the people.

The above claims can be verified by observation of the U.S. National Debt Clock.

Through bribes, obfuscation, and endless harassment, any new party that truly met with the qualifications of being 'the people's party' would be rendered totally ineffectual by those running the de-facto State. We don't need to witness another ridiculous effort that will go absolutely nowhere because of the controlled media. We don't need a new party.

The unwary thought they had elected a new President who was truly mindful of the needs of the people and who had a plan to drain the swamp and set things right. As the swamp was drained, more swamp creatures were put in their place. Lowering taxes was a nice ploy and a vote getter, but knowing that income taxes don't apply to living beings and have been foisted on us through fraud and trickery, the only correct and honest act would have been to declare the IRS and Income taxes void. I'm surmising that Trump won't show his tax statements because they don't exist. If a meager farm boy from Ohio can see the exit from income taxes you know damned well a billionaire has that knowledge and the means to employ it without fear of retaliation.

We talk about electing a good representative of the people for the President of the United States as though said entity was a de-jure elected official of our country's government, when in fact a president of that entity is nothing more than the CEO of a privately owned corporation called the United States, with no more lawful authority over the people than the president of WalMart. Don't say anything to WalMart, it might give them really BIG ideas.

What we have in DC is a very adaptive talking head who gives the appearance of caring about the people while doing the bidding of his controllers. He'd last less than 30 minutes if he actually tried to create a lawful government, ala JFK. Looking for a new President of the U.S. that we could count on to bring sanity to the scene would be equivalent to putting wheels on miscarriages. We don't need a new President of their de-facto regime.

We don't need any more laws. We have plenty of laws in place to deal with every possible eventuality. We also have millions of statutes, codes, ordinances, rules, and regulations which pose as laws, but are nothing more than public policy under bankruptcy to suck up the energy of the people for the benefit of the owners of the U.S. corporation, the Rothschild/Vatican international mafia. If the public laws that are in place were enforced, all those criminals occupying that mafia and their operational minions who possess knowledge of this giant fraud would be hanging from light posts.

We don't need any new laws.

I'm sick of hearing about the national debt as well. Let's look at what it really is as its obviously not national debt, but corporate debt that has been foisted on the people as their responsibility by a bunch of scum bag thieves from behind the scenes. They bankrupted their own corporation, created legal fictions; (estates of the presumed deceased who are known to be alive), and have attached those fictional entity straw-man estates to each of us so they can make those fictional entities liable for the debts of their bankrupted corporation. And most of the people are none the wiser. Now that's what you call slick dealing.

Anyone elected to office would eventually be killed off, corrupted or at a minimum, pushed to being completely ineffective and powerless. No president can do anything if they don't have support of the Congress and the Supreme court. That is the comedy of our situation.

Anyone who believes Trump is successfully doing anything should wake up. The disagreements you see in public are just done for show to appease the citizens who are naive enough to believe everything they see and hear.

Ron Paul did not play ball the way he was required. His constituents kept reelecting him and even though he outranked many of his peers, he was still stuck in one of the smallest offices in Congress. Even while running for President he was still pushed out of being able to win by his own party.

I have watched and I have looked up the federal governments CAFR and i see the value of the public lands but i could not find the reference to owned corporate stock. Though none of that matters as the corporations have been listed as human beings and they actually control our government and through them us.

Daniel Allen; I agree with what you have said and claim, like you we do not need more laws. I say we need a lot less. In fact I say we should repeal EVERY law created after December 1912 and start with the law that has been introduced at least twice and has never been supported by ANY Democrat! Currently there are seven co sponsors all Republicans.  The One Subject At a Time Act.  Then we would have our constitution back and there would have to be real discussions about new laws along with transparency.   https://downsizedc.org/act/one-subject-at-a-time-act/

It is said that the 14th did not end slavery because its true intent was to enslave the free. Govcos creation of the straw man estate [legal fiction] that was attached to every man, woman and child was one of the greatest feats of enslaving the people of all times.

The 14th: Any 'person' born in the United States and subject to the jurisdiction thereof is a citizen of the United States. Let's break that down just a bit. First of all, when used in any legal setting the term 'person' always refers to an artificial entity [straw man] and not a sentient being.

Next we look at 'born in the United States'.  Since the United States is a privately owned federal corporation and not a country, how could a man be born in a corporation?  Obviously, the only entity that can be 'born in a corporation' is whatever that corporation created. A U.S. citizen  is the all capital letter legal fictional straw man estate and nothing more. On the other hand, if you think you are one then welcome to the onerous position of having to consider all the millions of so-called laws being applied to you.

They've conned us into a state of slavery via terms of art. They've even got most of the people believing that they are responsible for the so-called national debt as co-partners in bankruptcy when it is those same straw men that were created for that surety-ship position. We need to do a better job of learning how to read their deceit.

And teach others about the deception too.