The No Party Party 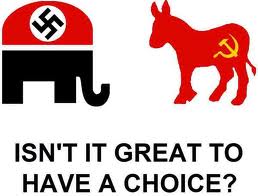 The people of the states need to be given the choice of voting for a republican, a democrat or a candidate representing those with no party affiliation.

Requiring your state legislature to have primaries that choose a republican, a democrat and a candidate with no party affiliation would restore to the people the ability to elect candidates that represent the people rather than the republican and democratic parties.

In state primaries a the candidate with the most votes from the republican party, the democratic party and the candidate representing the voters with no party affiliation will meet in the General Election. The best way to restore our republic is stop re-electing incumbents. If Congressmen knew that they not be re-elected they could concentrate on representing their constituents rather than on soliciting donations from Wall Bankers and Corporations.

If Congressmen dedicated their time and talent to represent the people rather than on raising money for their re-election they could vote their conscience.

As long as we continue to re-elect incumbents we will continue to see more and more regulations and higher taxes. Yes, unless they are like Trey Gowdy, who will get answers! Too bad he's out of the House, having served 8 years...