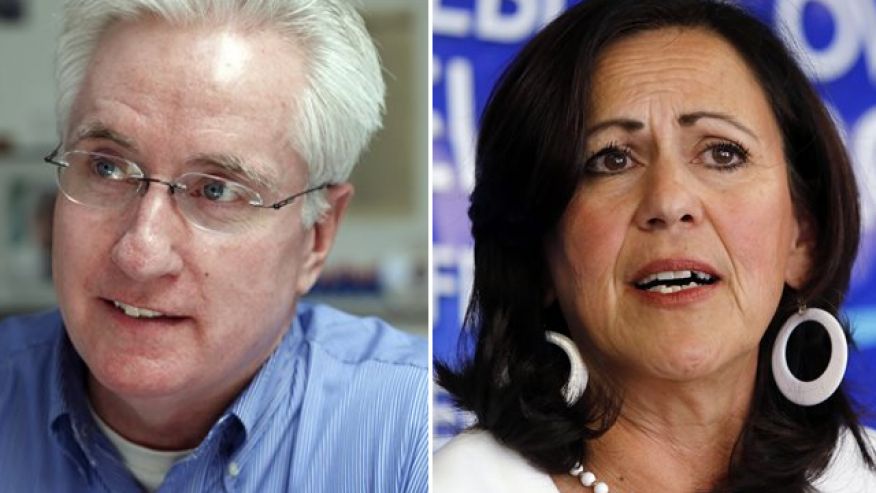 Two Democratic lawmakers in Colorado, including the president of the state Senate, were recalled Tuesday in elections brought about by their support for tougher gun control laws.

According to unofficial results, voters in Colorado Springs favored recalling state Sen. John Morse, the body's president, by 51 percent to 49 percent. With 100 percent of precincts reporting, state Sen. Angela Giron of Pueblo was defeated in her recall election, 56 percent to 44 percent.

The Colorado Republican Party called the vote results "a loud and clear message to out-of-touch Democrats across the nation" in a statement released late Tuesday. Colorado's Democratic governor, John Hickenlooper, said he was "disappointed by the outcome of the recall elections" before calling on state residents to "refocus again on what unites Coloradans -- creating jobs, educating our children, creating a healthier state -- and on finding ways to keep Colorado moving forward."

"We as the Democratic Party will continue to fight," Morse told supporters in Colorado Springs as he conceded the race. Republican Bernie Herpin, a former Colorado Springs city councilman, will replace him. Giron will be replaced by Republican George Rivera, a former deputy police chief in Pueblo.

"We will win in the end because we are on the right side," Giron said in her concession speech.

The votes marked the first time in Colorado history that a state lawmaker faced a recall effort and the biggest backlash in states that passed tougher gun-control laws following two mass shootings last year – at an Aurora, Colo., movie theater and a Newtown, Conn., elementary school.

The states’ effort came after President Obama’s unsuccessful attempt to get Congress to pass stricter federal laws – including tighter background checks and bans on assault weapons and high-capacity gun magazines.

In Colorado Springs, the majority of registered voters are Democrats, but many are conservative-leaning. 23 percent of them, in fact, signed the petition to recall Morse, according to The Denver Post.

The National Rifle Association and New York Mayor Michael Bloomberg lined up on opposite sides of the recall effort, led by gun-rights advocates upset over the legislation and how the hearings were conducted.

Both state legislators voted for 15-round limits on ammunition magazines and for expanded background checks on private gun sales.

The legislation passed Colorado's Democrat-led legislature without any Republican support and was signed into law by Hickenlooper, who had initially rejected calls for stronger gun control laws.

Morse, a former police chief in suburban Colorado Springs, said Colorado's gun laws were commonsense ideas to reduce fatalities in mass shootings. He was first elected to the Colorado Senate in 2006.

Reported contributions to Morse and Giron totaled about $3 million, dwarfing the reported amount raised by gun activists who petitioned for the recall, though some independent groups didn't have to report spending. Both the NRA and Bloomberg contributed more than $300,000 to the pro- and anti-recall campaigns.

In addition, dozens of elected county sheriffs have sued to block the gun laws.

One of the Morse recall organizers, Timothy Knight, said supporters are upset that lawmakers limited debate on the gun legislation and seemed more inclined to take cues from the White House than their constituents.

"If the people had been listened to, these recalls wouldn't be happening," Knight said.

The Associated Press contributed to this report.

Great news! In 2014 let's get rid of all the socilist in Colorado.We will need you for the state convention.project.

When do we get to recall Obama?

Permalink Reply by brenda herbert on September 11, 2013 at 6:21am
When do we just get to totally clean house in this government? They all must go. When are our military going to arrest all these traitors .

God Bless the people of Colorado for standing up against the DC puppets.

Killing mosquitoes one by one was not the way Yellow Fever was ultimately defeated. The solution came when the swamp was drained. By draining the swamp the breeding ground for the mosquitoes ceased to exist.

The only way to end Congressional corruption is to prevent the financial elite to from funding the elections of candidates that will follow their marching orders. The original 13th Amendment prohibited elected officials from accepting compensation in exchange for political favors. The penalty for accepting illegal payments was the loss of one's citizenship.

Your recall has given hard-working California voters hope in the recall effort of Governor Jerry Brown in California.

Jerry Brown's support of the LGBT lobby with the passage into law of AB 1266, the "boys in the girls shower bill" has made voters realize that their political leaders are out of touch with the will of the people.

"If the people had been listened to, these recalls wouldn't be happening," Knight said.

Politicians have forgotten that in America, politicians rule "by the consent of the people".

They should of been tarred and feathered and then run out of town on a rail... Grass roots politics at its finest. This should send a message loud a clear to all those that would want to try and strip us of our God given right and protected by the Constitution to process firearms. Our founding fathers did not put the 2nd amendment into the constitution so we could go hunting but to defend ourselves from an oppressive, tyrannical and despotic government.

Of course you're right about that, but today, I will celebrate! ;-)

Killing mosquitoes one by one was not the way Yellow Fever was ultimately defeated. The solution came when the swamp was drained. By draining the swamp the breeding ground for the mosquitoes ceased to exist.

The only way to end Congressional corruption is to prevent the financial elite to from funding the elections of candidates that will follow their marching orders. The original 13th Amendment prohibited elected officials from accepting compensation in exchange for political favors. The penalty for accepting illegal payments was the loss of one's citizenship.

What was done in CO needs to be duplicated across the board! And let's get rid of the electronic voting machines while we are at it!

I truly believe the election of 2012 was a fraud!  I don't believe Obama won and I know that Romney would not have won either! We all knew that both candidates were socialist! There was no lesser of two evils when it came to Romney and Obama!  We know from the primaries what was done to RonPaul in Main and other states, the whole election was rigged!

This is a fact, neither party will ever give us a candidate that has integrity and is truly conservative! The corruption in both parties is so bad that we really need to face reality!