Void / Do Not Use

It's All About Venue - part II 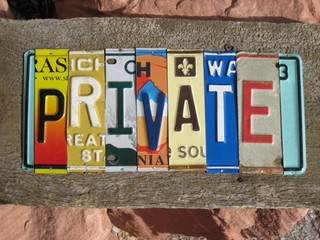 Ok, now that we have established that it is a venue jurisdiction that is being levied against you, let’s take a look at the auto-mobile registration. We all know we are “required” to have a plate made of metal with letters embossed into the surface and attached to the rear of our auto-mobile in order to avoid major hassles with the local constabulary. The fact that this “registration” expires is clear evidence that it is no “registration” at all but merely a TAX placed on your property making you liable to the STATE for that “fee”. So in order to avoid this hassle you simply pay the “fee” and the County TAX collector issues you a new “allow you on my road” sticker till it once again “expires”. Isn’t that funny that it’s the TAX collector who issues this “sticker”? Things that make you go, Hmmm.

Well here’s the good part. When you get that sticker in the mail, you’ll notice that of to the right of the dated sticker there is another one that says “VOID/DO NOT USE/NO USE”. So if you’re not supposed to use that sticker, then why do they even send it? The answer is simple; because by their own rules, that sticker is their state’s VENUE remedy; they have to offer this option, but they don’t have to tell you about it. Why else would they waste their time and the “Taxpayers” money? The use of this “option” is highly discouraged.

Why do they discourage its use? Because this sticker is your optional declaration, should you choose to use it, that removes you from “their state” PUBLIC VENUE and securely places you in “your state” PRIVATE VENUE and they don’t want you to know that.

By placing this smaller “VOID” sticker on “their State’s” license plate (the plate is not yours either), this acts as a reminder to any “policy enforcer” that despite the fact that you are “required” to have a “license” plate, you are in “your state” PRIVATE, COMMON LAW VENUE, “upon the land” and not “in the territory”.  You are declaring that you are not “within” the U.S. territory “carrying” “passengers” and “operating” a “motor vehicle”, but instead are travelling in “pursuit of happiness” and steering your “conveyance”. “Jurisdiction”?

Some of the information in these videos are the basis of my law suit.

As a continuation of the videos; when the judge violates your rights, wait a day or two, go back into court and get a copy of the court papers pertaining to your case. Now you have hard evidence that they violated your rights! Use the UBC (Uniform Bonding Code) to sue him/her judge and others, and report it to the bonding companies, then collect as their bonds get jerked!

I am about to do so, Wayne. What do you mean.. collect? How much?

I would use the government's own price format, so there is no argument. I think you can get a copy of the charges for the different crimes on CivilRightsFreedom.com. I see a different rate on this Legal Notice and Demand that we have been posting since yesterday. It depends on the crimes and whether they are state or fed. You use the fee x (multiplied by), the number of people in the crimes x (multiplied by), the number of days. This Legal Notice and Demand says $2,000,000 per day x officers involved x days. Others that are a little older, but maybe more realistic are usually $350,000 per violation per individual, per day. I have also seen a newer price chart that shows $100,000 per day for unjustified jail time. I would just have to know what happened, for how long, and how many individuals are involved, and what jurisdiction. If you use the Legal Notice and Demand process, and have everything preserved, as I did, your chances are better because you had served them notice before the crime was committed, so they cannot say they were not warned, and that is the value of having the LN and D done before the crime is committed. $100,000 per day has been a standard for a long time for unjustified jail time, but I do think it is higher now.

Winston is the only one I ever heard of that actually collected. Have you?.. or do you know anyone who has?

Hartford Van Dyke, the person who developed the system I am following has collected, big time. I have seen copies of the checks he has donated to hospitals, and they are in the mega millions.

When you use this system you only keep 10% of what you collect, the rest has to be donated back into society. You start your own "Robin Hood Bank", and give the bulk of it away. I want to donate a large sum to the Veterans Hospital an SLC since they saved my life one time.

Hartford taught Randy Due. They both have copyrights on the material, and have released all rights into the public domain, and don't even care if you sell the materials, if you will just get it out, and get it used. They are both true Patriots who are just more concerned about where this country is going than they are concerned about their own pocket books.

You may not be able to access all materials, as Randy is currently locked up. He was helping too many people and the government people weren't happy about it, so they locked him up to keep him quiet. Hartford spent 7 years behind bars for releasing a lot of information that the govt. didn't want exposed. Do a Google search on Hartford Van Dyke, and another one on Randy Due. Then another one on Roger Weidner, Milt Mitchek, Will and Pamela Gaston. Pamela was assassinated after they won their case. We all know each other, and some of us knew Cleon Skousen before he died.They exposed the fraud that is taking place with the Child (so-called) Services from the government.

The government is involved in child trafficking and sex crimes through their various programs, which is part of why so many kids just disappear. Your Marriage License permits the government to be the DOMINANT 3rd partner in your marriage, and owns your kids. The Birth Cert. is a warehouse (Birthing - as in Maritime Law Birthing a ship) receipt, with govt. claiming ownership of your kids. Then they take kids away from parents, even though there has been no crime committed. Look on the lower left corner and you will find the receipt number, that is the bond number.

Now Rosanna, do you have a bigger picture of what is going on, and why? Local govt.s make a lot of money from the FEDs when beds are occupied by people who are judged to be mentally incapacitated, which is why jails and prisons are so prevalent. They are owned by corporations who charge the naive public roughly $100 per night per bed. They want you in jails and prisons regardless what you hear in the news. Tim Turner told me that the government's own statistics are that 70% of people in prison are there for non-violent crimes, and most of those people have committed no crime at all.

When I was unjustly charged and convicted, I used my time to interview people and discovered approximately 50% of the other inmates were there because of lies and false accusations. This keeps the jail beds full so they can charge the naive public. It is all about the money. There are more people in jails and prisons, per capita, here in this country than any other country in the world. That is why we need to get to using UBC, to pull their bonds, and get the real criminals out of the criminal injustice system.

Bonding companies are like any other company. They are there to make money, but can't do much about getting rid of "anti-social" officers/judges/etc. unless charges are brought against them. If you don't charge them, they have no reason to jerk their bonds. Bonding companies don't like paying out on claims, so they will willingly get rid of the criminals in the system, IF we will bring criminal charges against the criminals. You can also file charges on the bonding company if they don't want to hold good on paying you. That is why one needs to mail out to at least 5 (I'm doing 10) major bonding companies (like AETNA, HARTFORD) so as to "publicize" the criminal actions. It is called pier pressure. That will also help to ensure the criminals don't get re-bonded by a different company.

Did you include Western Surety?? just asking since I know that is where Fansler bought his bond. What would be useful is if you post the list of bond companies you have for everyone. This is the kind of working together we need. it speeds up our jobs = "sharing'. Thanks

What happened to the trick I just showed you Wayne? Why you make me edit your stuff? That took me about 5 seconds to fix. Next time put the link in like I showed you. It is extremely easy.

Oh, I see what you're talking about. Sorry about that. It never occurred to me.

Actually, I misstated something. Will and Pamela are the ones who exposed the Child abduction issues. They are the ones that wrote the book SUI JURIS.

Randy Due and Hartford Van Dyke have both been on this site on Blog Talk Radio. Go back a few months and you may find where you can listen to them.

The first video on this page with the speaking FROG has been on NLA website for a long time... http://www.nationallibertyalliance.org/jurist-orientation  It is the 8th video down on the NLA page. There are many many videos on this NLA page and other areas of the website...

While I have not compared the frog video I think it is a duplicate and altered the voice. There is so much information on this website. NLA needs patriot helpers if you want our juries up and running. I am asking for support from all. If you don't believe in this process PLEASE do not post negative remarks about our endeavors and the pains we are going thru to fight injustice...

BTW the information received in both the "how to" videos is absolutely correct.

I have followed Marc for a long time. He helped me get to the point I am in my understanding. I have beat these jerks a couple of times demanding they produce an injured party. Of course, they can't, but sometimes its still a wrestling match that most do not want to go through. I don't see we have an honest choice. Soon, enough people will stand up to the a - - holes and they will be exposed to a large enough number of people they will have to stop. Also Wayne has been telling people of the bonding code. Let's gettem!! Also, the criminal complaint is one of the best things going. Marc's show is on Saturdays. Listen in!