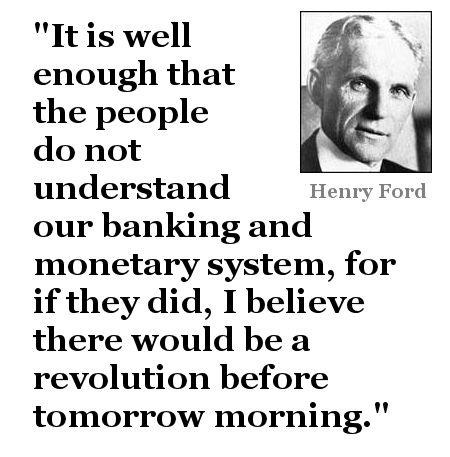 As long as the majority of the American people continue to sleep, the bankers will continue to rule and reign over us. The financial elite have created an empire and invested a tremendous amount of money to keep us in the dark so that they can collectively pick our pockets without us even knowing it.

A slave who thinks he is free is much more productive and easy to control than a man who knows he is being treated like a milk cow at a dairy. When a sufficient number of Americans realize that our government is a tool used by the financial elite to control us while stealing our time, talent and productive capacity, they will awaken and do something about it.

The truth is that we are all slaves on a government plantation that is owned and operated for the benefit of the few at the expense of the many. We cannot escape the debt prison that they have created for us until we wake up and refuse to comply with the unconstitutional laws which have been written to enslave us.

We have a moral obligation to obey just laws that support the principles of individual liberty and personal responsibility, but we also have a duty to refuse to comply with laws that benefit some at the expense of others.

Our government derives its power from the consent of the governed. When that consent is withdrawn the government loses its authority. When we follow their rules and obey they unjust edicts we give our consent and feed the beast.

All rules, regulations, codes, ordinances and statutes that are unethical, support the financial elite and allow them to enslave us. Any law that is just should be obeyed and we should refuse to comply with any law that is not.

The bankers have created a prison for the people to live in and the government has become the enforcers that allows the rich to make us their perpetual debt slaves.

This message needs to be shared with millions of Americans that are sound asleep. Goethe, the German philosopher observed "The most helpless of all slaves is the man that falsely believes he is free."

Here is a wake up!