Who is the Final Arbiter of the Constitution? 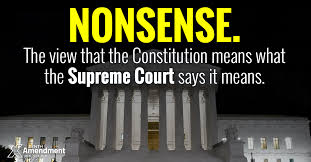 Who is the final arbiter to decide  the meaning of the Constitution and what is not Constitutional? Should it be the President, Congress or the panel of unelected lawyers in black robes?

Should such important decisions be decided by the delegates of the states who wrote the Constitution and created the three branches of government ? Do the employees have the authority to dictate to their boss, to the children have the authority to over rule their parents and does the tail have a  right to wag the dog?

Is the Federal Reserve and the IRS Constitutional? Is the EPA, FEMA, CIA, FBI, or the myriad of regulatory agencies Constitutional? If in the opinion of 13 states all action determined to be unconstituional can be declared unconsitutional.

More Videos on the Republic Review