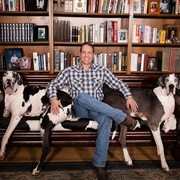 You can listen to podcasts, and participate online, but there’s online one way to save America, and that’s by getting off your butt and fighting for her. www.ConventionOfStates.com Lord knows, no one in DC is voluntarily giving up the power.

Along the way, I helped raise a million dollars to give away to grassroots groups, and I helped to arrange a nice little class action suit against the IRS to slam those federal thugs for targeting my friends in the tea party movement. The IRS ultimately had to fork over $3.5MM. Yeah…we ain’t afraid of no stinkin’ government.
Today, I lead the Convention of States Project, which has well over 4 million supporters spread across every congressional and state legislative district in the nation. It’s the largest, self-governing grassroots army in history, and we damn well are going to take this country back from Washington DC and return it to the people.
I’m a God fearing, Christian Jew, who loves guns, big trucks, big horses, all sorts of music, food, art, culture and most importantly, my wife and kids. And don’t forget dogs. Life without dogs? I don’t think so. Levi and Gideon are my Great Danes, and damn good back-up to my Glock in a pinch. You might meet them first if you should happen to try to get into the compound without notice and permission. They are very friendly...except when they aren't.
I’ll be putting up new episodes of my brand new podcast, The Mark Meckler Show (original name, right?), every day. We’ll interview interesting people, and try to get more personal, instead of just political. And we’ll do our best to keep it light and irreverent. If you can’t have fun doing it…then don’t. I know I won't. We’ll also encourage folks to get involved…in the show, in the community, and in real activism. You can listen to podcasts, and participate online, but there’s online one way to save America, and that’s by getting off your butt and fighting for her.

You need to be a member of MARK MECKLER SHOW to add comments!