A Loose Cannon on the Bundy Ranch 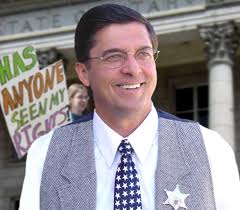 For the past five years I have been a strong supporter of former Sheriff Richard Mack. I have long considered him to be a man of integrity and one of the most articulate spokesmen in the patriot community.  I believe that he is a good man, but has recently exercised what I would consider to be very poor judgment. As his friend, I believe that it is important to support him when he is right and to question him when I think he is not. The purpose of this post is not to discredit Sheriff Mack, it is to question the wisdom of his suggestions. I don't think that opinions he promoted are shared with the vast majority of those in the patriot community.

When he suggested that putting women in the front of the line so that they could be sacrificed in order to make the government look bad, I shuttered at what he had said. The strategy he endorsed made all his supporters look like dangerous radicals. I am sure that there were numerous women at the Bundy Ranch who would have suggested that sacrificing Sheriff Mack would have been a better alternative.

When Sheriff Mack made his appeal to the American people to donate money to CSPOA so that he could pay elected officials to come to the Bundy Ranch, I shook my head in disbelief. I met several people at the ranch who came there with virtually no money in their pockets. Unlike some of the politicians who came for photo opportunities, they came at their own expense to support the principles they believed in.

It is my understanding that the Constitutional Sheriff's and Peace Office's Association is a sole proprietorship. All of the funds generated flow into Sheriff Mack's personal checking account. As a sole proprietor he is not required to reveal how much money he has received or how the money is being spent.

I think that Sheriff Mack has done irreparable damage to his image and to his credibility. I can't imagine how any reasonable County Sheriff would want to be associated with the "loose cannon" of the Bundy Ranch.