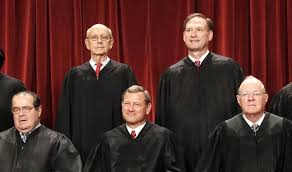 The members of the Supreme Court are supposed to be the guardians of the Constitution. It is their job to make certain that any form of legislation that violates the Constitution and the God given rights of the people is declared null and void.

The fact is that the Justices on the Supreme Court are more concerned about finding excuses to justify unconstitutional laws than they are about defending the Constitution.

The Constitution was to be our nation's road map to peace, prosperity and freedom. It was written to protect the rights of the people and to prevent the abuse of power by the Federal government.

Somewhere down the line things got turned upside down. Now the Supreme Court is determined to expand the power and authority of the government at the expense of the people.

Lawyers are wordsmiths who can convince a jury that night is day and up is down. The Constitution was written to be easily understood by the common man, but the lawyers on the Supreme Court have deliberately sought to re-write the Constitution by interpreting it in a way that would enable the bankers to have their way with us.

The Supreme court is a total fictional fraud and has absolutely no authority whatsoever.  Read Article II, Section 2 of the Constitution for the united States of America where it reads "The president 'shall' nominate Judges of the Supreme court, not 'JUSTICES'.  What we have here folks is an in your face, hidden in plain sight fraud against the American people.  These clowns called Supreme court justices should all be immediately arrested and charged criminally with fraud and treason, period!!!!!!!!!!!!!!!!!

Hello Daniel,  Would you be so kind as to convey what parts of my reference above may not be the whole truth and nothing but?

Could it be possibly the reference to treason?  I say treason because these clowns are well aware that all US citizens are deemed enemy belligerents occupying conquered territory under the Trading with the Enemy Act of 1917 and supercharged by the Emergency Banking Relief Act of 1933. Along with them, the so called SCOTUS not quashing such nonsense as well as allowing the stealthiness of the Lieber Code is restricting these government agents from disclosing such a horrific status to the people.

I have to agree that it looks that way. I think Roberts was trying to make a fool of Obama and thought the Congress would throw it out as a tax, but he forgot they are corrupt. But this country is now in a huge mess not following the Constitution and that is in BOTH major parties. People need to wise up like I did after 30 years on the Republican executive committee and get out and become Libertarian. Check out their platform. They actually believe in and follow the Constitution. They carry one with them and know it by heart and speak out on unconstitutional things every day. They live and breath the Constitution from what I have seen now being one of them..and proud to say I am. I am FREE to fight for liberty instead of defending lies and fraud.

Roberts did say in his edict on Obama care, that it was up to us, the people to remove the problem.

"... secure the blessings of liberty to ourselves and our posterity ..." ... That alone says it all. Abortion is not legal in the eyes of Constitutional beings. Proof that the Supreme court is not Constitutional. Is that not the highest form of treason? Allowing the death of innocent people protected under the Constitution? The organization should be disbanded and removed from the protection of the Constitution.

there is no saying in the bible which protects the child only if a woman loses her child to someones action, But then the husband could exact claim against that person for his wifes life  and their unborn child.

this probably should be debated but one must read the bilble to ascertain that argument.

we are living in the days where the lie is believed to be truth and the truth is called a lie, now sovereigns have a bad label and considered domestic terrorists and voilent rebels for standing up for their god given rights and the teachings of our founding fathers,

so if these rights and truth are so wrong:: why dont they just blow up mount rushmore and the monuments of lincoln, jefferson ect,ect,,,

America was an experiment anyways, its the place on earth with one of the LEAST freedoms that i know of

land of the free , yeah right, land of the jail business and big liars,

God given rights? There is no such thing! What god or God is one referring to? The Greeks and Romans had theirs, let me see Apollo, Diana,Jupiter, Poseidon, Mars, Aires etc. They have all been seen as malicious, capricious, paranoid, temperamental, unkind, envious and unpleasant folks. Try telling one of these psychopathic judges behind their raised platforms about these rights. Even if one holds these archaic Christian beliefs, you will be promptly led to a firewall with dubious consequences. Remember, the Constitution does not mention God if my memory serves me correctly. Don't kid yourselves folks! You have got to be kidding me!

Creator of what? That term has no meaning to me, only to the person who makes references to it. Look around folks and observe what this Creator has given us! I will not allow myself to pretend to know things I do not know. I have no evidence of this Creator even when I was young, naive, and Catholic. What a rush!

Actually Devine Providence and Laws of Nature and of Nature's God was mentioned in the peoples voice the Declaration of independence.

Yes I do admit thatGod given rights are only to those who follow the path of God ,but through mans journeys One can see that as man left god so did the hand of God leave them.

Now the Constitution All members of that legislature knelt in prayer for guidance But there was no reference to God Onlyy to the ability to claim what is rightfully the peoples.

The Constitution was drawn up to help the States, not the people, make a contract with the new federal Government. They knew this manufacture was for those states which included the sovereign people of the newly established republic, therefore the power was to rest in the hands of the people under the declaration of independence.

For this document along with the addendum to the Constitution named the bill of rights.

In those days definitions vary from today. Madison had to struggle with what he neededto put into the main document and admitted it was the agreement from the States where in lies the people and a Government outside the people.

This keeps the soveriegn from having to do the mundane acts of every day legislating by using representatives they elected and the  federal Senate  whos people were to be chosen by the representatives of the various states.  This gave the states more control over their legislations but since the 17th  that controlhas been lost.

I feel that God was not to be mentioned in the agreement of the states and the federal government.( this Is a subject i would question and debate why this was so?)

Im game on this one whoever wants to debate the founders purposes because in almost all of their writings they mention God or Devine providence. Even then there were people in the higher offices who were atheist so those with religious backgrounds made carefull statements so as not to create problems.

And again God tells us to make a choice between one side and the other for those who ride the middle will be spat out forever.

all he time i have friends who send me presents here is one and read at your own peril   http://www.zerohedge.com/news/2015-03-28/guest-post-only-truly-comp...