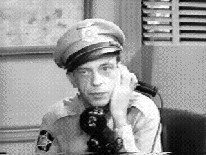 The role of County Sheriff is to protect the rights of the people living in his or her county and to defend the Constitution.

When the Sheriff simply enforces the codes instead of upholding the law and defending the Constitution, they violate the Constitution that they have sworn to defend and uphold.

It is the job of the County Sheriff to protect and defend the life, liberty and property of his or her constituents by arresting those who would violate those rights.

The County Sheriff is elected by the people in the county to serve them, unlike the Police Officers who are employees of the incorporated cities operating within the county. The Policemen and women are revenue officers for the Cities and it is their job to enforce rules, regulations, codes, ordinances and statutes.

When a police officer or county sheriff does his or her job properly they are peace officers not law enforcement officers. When they defend our rights they promote the peace and serve us. When they simply enforce the codes, etc., they seek to control the behavior of the people,

Their job is to arrest criminals not to regulate our behavior and turn us into criminals.

Individually we have the freedom to do as we wish as long as we do not violate the lives, liberty or property of others. We are responsible to govern ourselves. When a bully wearing a badge steps in they often times turn small problem into a major catastrophe. If you want to solve a problem you need a peace officer not a law enforcement officer.

The job of the Law enforcement officers is not to prevent crimes by controlling people's behavior, it is to punish those who do. Red light cameras, sobriety check points and seat belt laws are prime examples of how our so called public servants violate the Constitution in order to protect us.

The sheriff, like other elected officials such as judges, wears 2 separate and distinctive hats. The 1st hat is that of protector of the peoples' rights as attested to by their oath of office. The real trick is getting them to wear the 1st hat. They will fight tooth and nail to keep from donning that responsibility.

They are elected by the people and have a fiduciary duty to the people, however, they have all been co-opted through election campaign funding, to wear a 2nd hat.

The 2nd hat is that of public policy enforcement [deceptively referred to as law enforcement] under a condition of national bankruptcy. It is quite easy to get away with as the majority of the public is not acquainted with the difference between law and public policy. I'm guessing the same percentage of people are not even aware that Corp USA is bankrupt and has been since its inception. Many are just now awaking to the aspect that they can't even do the business of living without the straw man interface to their commercial system.

The police, not having been elected nor subject to an oath of office, are free to dispense that brand of 'justice' that is intended to milk the people, through their transmitting utility, the straw man, of their energies. They are merely revenue agents taking part in foreclosing on government assets [straw men] for the benefit of the creditors in bankruptcy, the international banksters and the Vatican.

The entomology of the term 'police' is from 'policy', not law enforcement. It is the same everywhere in the world where the banksters are in control of government. Contrary to your statements above, their job is not to protect us but to enforce the bankruptcy for the rat bastards who formulated this system of semi-concealed slavery.

"None are more hopelessly enslaved than he who truly believes he is free".

I kept wondering the same thing!  But, I also wondered why they call themselves Law Enforcement Officers, when most of the time they themselves don't know what laws to enforce when they don't know the laws they represent to enforce.  They then decide to guess or lie about it.  That is when it escalates into a lot more than what it is, sometimes a deadly situation.  So, when did they decide on shoot now, ask questions later?  How is that justification?  If "We the People", did what they do, it is homicide/murder...and they wonder why we don't trust them. ?1?  Nothing but a "for Profit" organization at no matter of cost of lives or property, and they think they are above us because of guns and badges?  When did "We the People" started paying our "public servants" to enslave us and kill at will like a rabid stray dog???  Nothing more than a Power Trip for control...

Well, Bill, it all started when those who scammed us by changing the system we lived under from a de-jure, lawful government, to a de-facto legal government after the Civil War. With the creation of the public fool system to indoctrinate our children instead of teaching them, they have dumbed down the public to the point where most actually believe that we are free.

They deceptively call themselves law enforcement officers because they were taught in the same mind control system that deludes most Americans into believing that they are---law enforcement officers, there to protect us. They brazenly pull the crap they pull because they have been emboldened by those at the top to instill fear in the people. People are more easily persuaded to be be compliant and paying when they are fearful.

The constitutions have always recognized 2 systems of law in the states and United States.  Citizens of the states [ excluding 14th citizens ] are suppose to be under the common law and the protection of their state constitution which secured to them a gov of very limited powers that was created to serve them.  Thus the term, public servant.

Today the official policy of the communist controlled gov is to impose 14th status upon everyone. This is a class of people under civil law where the gov holds the position of sovereign.  There is only the law and no right to justice.  The police are no longer 'civil servants' as we think of them.  They are the servants of the relevant legislature / sovereign.  Their job is to enforce the law as written.  This includes the Sheriff.

The people are constantly lied to about rights to keep the population from rebelling. For those who have been in court, the judge makes it very clear immediately that there is only the law and no rights.