I believe that one of our most fundamental rights is the right to defend ourselves from individuals who would threaten our lives, liberty or property.

When you take a gun away from law abiding citizens you make it easier for criminals to commit crimes. Do advocates of strict gun control have evidence that supports their premise that communities are safer where gun ownership is banned? Not likely; let's see what one of our founders thought.

“The laws that forbid the carrying of arms … disarm only those who are neither inclined nor determined to commit crimes…. Such laws make things worse for the assaulted and better for the assailants; they serve rather to encourage than to prevent homicides, for an unarmed man may be attacked with greater confidence than an armed man.”   Thomas Jefferson

There is a mountain of evidence that the cities with the most crimes are those where the victims are denied the right to protect themselves.

The solution is not to ban automobiles, it is to punish those who turn innocent people into victims,

Rather than seeking to take people's right to use a gun, we should seek to disarm those who would use guns to commit crimes.

Anyone using a gun in the commission of a crime should be incarcerated for a minimum of ten years on their first offense and twenty years for each subsequent violation.

The problem is not the ownership of guns, it is the abuse of guns by criminals.

Gun Control Made the Holocaust Possible 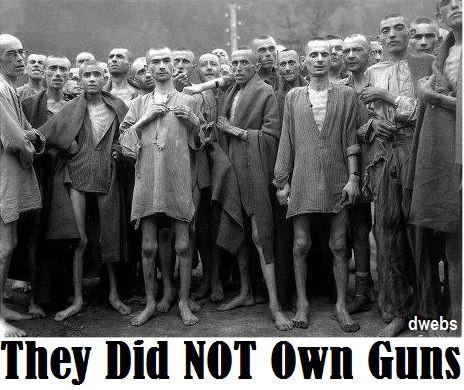 People who use guns to commit crimes should be severely punished, but responsible gun owners should not be denied the right to own a gun to protect themselves.

I don't care what u have done with a gun , its ur God given right to defend yourself from govt and criminals who cause harm and tyranny, yrs ago if u robbed a bank or what ever crime u committed, u did ur time, when u were released from prison they gave u a horse and gun, think about that for a while

The question is not "should criminals be allowed to own guns?" The question should be, "should the people be armed to the same extent as the criminals?" We know who the real criminals are. They are the ones calling for disarming the public. They know that the only way totally subdue a population is to engage an agenda of complete disarmament through sustained propaganda. If that ever occurs a real escalation of 'death by firearms' will proceed.

We have seen what other regimes have done to silence their critics [as noted above]. All their false flag attacks on the dumbed down public is intended to induce a mindset that guns in themselves are evil and must not exist in the public. I am constantly amazed at the rabid speech from the left to disarm the people. The most outspoken seem to be from the ranks of academia.

This is understandable since these people have been convinced that they are far too wise to be fooled. On one hand they are told how invincibly intelligent they are and then they are fed a steady stream of BS that a ten year old would question if given any of the facts. Global warming is one such nonsensical the highly schooled seem to have swallowed. Sorry, I forgot that, since several thousand international scientists declared Global Warming to be a complete fraud, the mantra was renamed 'climate change'. Hard to go wrong there as climate seems to change on a daily basis. But don't attempt to dispel this ominous threat to anyone with a Master's degree. They will be quick to let you know how superior their mental capabilities are.

I find it difficult to determine whether these spokespersons for the banning of guns are merely doing as they are paid to do and know, in the back of their minds, that once accomplished everyone [except those at the very top] will be subject to dismissal for any thoughts or actions contrary to the dictates of the NWO. Is it really possible that these minions are so dumbed down that they actually believe that the only ones that should be armed are the police and the government [IRS, Homeland Security, Child Protective Services, FBI, etc.] and that a gun-less society will, at last, be a safer, more peaceful society?

We definitely know who the real criminals are govt agents, the mob, and a few American citizens, the bankers, no real mystery here some day we will all have to be men and take back our country, by pen or sword