In Search of Liberty 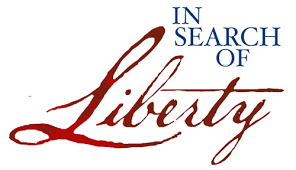 In 1775 the majority of the colonists in America were unwilling to risk everything they had to become a new free and independent nation. They lacked the courage and confidene to fight for their lives, liberty and property.

Then a miracle took place when Thomas Paine published a pamphlet that sold 500,000 copies and convinced the people in order to make their lives worth living, they would need to declare independence and fight for their God given rights.

With a population of less than 2.5 million people, he singlehandedly was responsible for a paradigm shift that led to the creation of a new nation.

Today with a population of 330 million, we would need to deliever our message to 66 million poeple. Witht he advent of the internet, this objective can be achieved in a very short jperiod of time.

We don't need to shoulder a musket, we recapure are freedom, we simply need  to  awaken our friends and neighbors and restire the principles upon which our nation was founded.

It seem no one here wishes to learn the meaning of the word constitutor so they can  know what constitution means and is..Thats a huge error as you base this whole site upon the false premise that a dead corporate Constitution that only applies to constitutor debtors is a good thing..OMG!!!  Folks get real embarassed when they wake up to decades of false belief!!  They wanna defend that error and like crazed fish caught in the net of deception fight like hell to avoid the facts,,,You have God's law telling you not to add to it or take away from it or show respect to persons yet you fight to be in bed with the dead using their rules that only appliy to the corporate dead constitutors,., https://www.law.cornell.edu/uscode/text/15/1127  try finding out why it is impossible for you to be a person of law... God hates persons...try reading your Bible at Deuteronomy 1:17. 10:17, 2nd Samuel 14:14, Matthew 22:16 ,Acts 10:34 James 2:9 and wonder why your defending a code only applicable to persons??  Some folks hate being wrong so much they will put up a vicious fight to defend their ego carrying not at all about the facts...No official of the USA has any authority to intimidate you to violate your faith if you have any...There is your solution!! The redeeming blood of Christ! Not some dead rag called a Constitution designed to make you forget about Christ and God's law and so you would bow to your new false god and be subjugated....  Now comes the constitution defender who will ignore the scripture defending his massive ego and in quest will diss Christ,,, Just watch..

Edward... you are taking scriptures out of context and applying legaleze to them. A contract is a contract... unless someone refutes that agreement or relationship: Preamble to the U.S. Constitution... "We the people of the United States, in order to form a more perfect union, establish justice, insure domestic tranquility, provide for the common defense, promote the general welfare, and secure the blessings of liberty to ourselves and our posterity, do ordain and establish this Constitution for the United States of America."  Our founding generation were NOT trying to get people to "forget about Christ and God's law" in any way. You best stop spouting your mouth until you research the bible a bit more and our original founding documents!!!

The meaning of the word person is a mask worn by a player on a stage..A fiction, a dead corporation in law. You can see why God is no respector of persons...The whole bait and switch religious fraud used the Bible to bait you then thet taught you to think you were persons and enticed you to register with and carry dead corporate person all caps tombstone name ID and sell your children into bondage just like Leviticus 25:44-50 says,,Do you think God's chosen people think free slaves is and was a bad idea?  They did not accept Christ freeing the slaves and in the 16th century joined up with the Vatican as banker...Go figure..You do not have to be anti anything but fraud!  No contextual teaching from this follower..Just the irrefutable facts that even the Rabbi's admit to with a grin..."Dumb Goyim" will argue and fight to ignore the slavery they are caught up in..What should we worry about???  We just sit an an Effendi and reap profits,,  I think the Constitution was their Idea so the folks would not anchor their government on the Bible...The Bankers would have had trouble taking over the nation had that been the case....  blessings upon knowing my motive is to wake folks up!!

Spoken as a believer in nothing. If not for our Constitution and Bill of Rights, then what?

if Lincoln and his followers had but followed our blessed Foundation, our own Civil War would never have occurred.

if but only for the Fifth Amendment, all Slaves, (Property) would have been purchased by the government, the Slaves made Citizens of a Free State and Lives and monies saved on both sides. But was never the intent of the War, was it?

The majority of our Founding Fathers were Free Masons who believed in a Supreme Being, The Grand Architect. That is why we are endowed by our Creator.

If our Citizens find comfort in whatever form of worship they choose, our First Amendment guarantees them that Right. It is not to be belittled.

Institute on the Constitution

No God. No rights. We are reaping what we have sowed. God is higher.

Jeanine,  I agree that people who have no God Relationship have no  sacred or inalienable rights to claim.  Then our next step is to be sure we are all on the same page about what is the problem, and what is our strategy for reversing the trend that is taking away our rights--if that is the problem.  I have been on this site about two weeks, so I'm learning, and that is my first question:   What is the problem.?

Mr. Robin may read this.  If so he may feel an urge to reply to my message here.  Mr. Robin, I did not get a clear picture of what you  think the problem is, but I'm hoping you will be patient and just read some more people's input before you try again to define the problem.  Now I will go back to Ms. Jeanine.

Ms. Jeanine, what do you think is a good statement of the problem that this site is trying to deal with?   After zeroing in on the problem, we might try to list possible steps of action that would help.      May all who wish to address political issues be blessed with wisdom and with a spirit of respect and patience.   Lewis

Hello Lewis and welcome to this site. Thank you for such a respectful greeting to the group.

I try to keep up but cannot. There is a wealth of knowledge here as far as the facts and the history of our precious country and her earlier beliefs.

It was the Declaration that was revolutionary, claiming all of our rights come from our One Divine Creator, and that government's only purpose is to protect those same God-given rights, and if government fails, we shall Alter or Abolish that government.

God is higher. Always. Was. Is. Will Be. Unless and until we quit focusing and giving credit to satan for all he has accomplished in this country while ignoring the very God who gave us this country, we will continue down the same path as the Romans to complete destruction.

A good book, Planting the Heavens, says that we plant the heavens with our declarations. A very small organ in our body with the most damaging impact, and it is our tongue.  Change what we say. Make it about God. Instead of about the evil that we see daily.

Peace, Protection. Salvation. Redemption. Glorification. Glory to Glory, we shall be changed, and with us, the atmosphere. Nothing can stop our God from doing what He intends to do with America.

I am NOT saying, don't be active. I write. I teach as much as I can, what I know to whomever I can. I have found that educating a liberal on the foundation of America leads right to an open door to the Bible. Truth and Righteousness can only come from the Word. I personally, think it is a beautiful thing to use the one as the bait, to the finer thing. To drop a seed about real Truth. The Word is active, sharper than any two-edged sword. It can even slice through the mind of a bright, married liberal Women's March, lesbian. I watched it happen.

Numbers 13:32 and Joshua 2:2.  Joshua sent out ten soldiers to see the size of the enemy. God called their report "Evil" that reported that the Hebrews were vastly outnumbered. It was the truth as far as the natural world. But the two others sent by Joshua kept their eyes upon the Lord, saw the same situation, came back and said, "We are Well Able" to take the land. And they did because God led and God provided. The battle IS God's. But we are to watch our mouths and keep our eyes on the Lord.

Everyone here cares so much about America and what we are seeing, in the way of marxism, government tyranny and corruption. Still, it is about God. Always was. Always will be.

We must learn the facts such as Keith is teaching, but we must war Ephesians 6:12. Our prayer is powerful, not only individually, but corporately, it is Unbeatable. The dead rise. The sick are healed. Plant the heavens. Light the fire where the #1 position is. Then come back and support the fire for learning more in the #2 position, where it belongs. God always wins. I am on HIs side.

I have learned to contain my political fires, they are still there, but I have learned prayer works. I am also, however, trying to educate Senator Rob Portman about more than a few things, the Senate Conservatives also. I did do a rant. But God, still is 1st. Amen.

I fully agree with wanting to hold onto the US Constitution, but regarding amendments, it would likely be good if we put term limits on the US House of Representatives.

It is our responsibility to educate our children and our grandchildren of the history about the Founding of our Republic, our Constitution and our Bill of Rights. No one else will but us! Knowledge is power.

Reply to Mr. Edward Jay Robin:  Focus, clarity, and specificity are necessary to good, effective communication.  A day or so ago, you posted a reply beginning thusly: "It seem no one here wishes to learn the meaning of the word constitutor ."   That is too general, i.e. too non-specific, because it casts aspersion on everyone who has posted to this website.   Your next sentence included:  "... you base this whole site upon the false premise.."   That, Mr. Robin, is a general, non-specific, blanket condemnation of this ConstitutionClub website.  Therefore, if you wish to be viewed as a non-disingenuous contributor to this site, I will expect to see specificity, clarity, and courtesy in your future postings.  You may wish to apologize for the condescending and accusative tone of your two-sentence posting today at approximately six A.M. 21Jan2019 .  <>