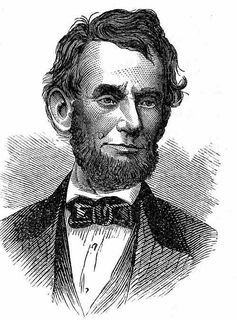 To discover the real Abraham Lincoln click on his image.

In order to save the Union Abraham Lincoln was responsible for the deaths of over 600,000 Americans. He completely shredded the Constitution and waged a war to enslave the states.

He was responsible tor the destruction of tens of thousands of homes and businesses in the southern states. His objective was not to free the slaves, but to create an all powerful national government that would rule and reign over the states and the people.

He saved the Union, but he destroyed our Constitutional republic and the sovereignty of the states. Before Lincoln's War the people had rights which became privileges after the servant government became the master of the states and the people.

He did not free slaves, he transferred their ownership from the  Southern Plantation owners to the Federal government.

Include featured articles, quotes, videos, games and quizzes.
To be sent to subscribers on Monday mornings.

AMEN KEITH--Lincoln's election and promise to sign Morrill Tariff signaled Secession by South Carolina followed by Southern state after state seceding. More AMERICANS died under the leadership of Lincoln than any previous time in history and more than many WARS since then.  It was GREED and POWER that fueled the War for Southern Independence, NOT slavery!  A "Civil" War is a war between two or more competing armies for CONTROL of nation or government, the War of "Rebellion" as many Northerners called it, was a WAR FOR INDEPENDENCE--NO different than the same goals this nation fought for in the American Revolution.

P.S.---I'd like to QUOTE General Robert E. Lee's statement to Governor Fletcher S. Stockdale, former Confederate Governor of Texas in August 1870:  "Governor, if I had foreseen the use those people (Union Army/North) designed to make of their victory, there would have been NO SURRENDER at Appomattox Courthouse; NO, SIR, NOT BY ME. HAD I FORESEEN THESE RESULTS OF SUBJUGATION, I WOULD HAVE PREFERRED TO DIE AT APPOMATTOX WITH MY BRAVE MEN, MY SWORD IN THIS RIGHT HAND."

Permalink Reply by Online Professor on February 16, 2017 at 7:35pm
The Restoration of Constitutional Money
Click Here

Lincoln was a BAR attorney for the railroads and bankers and related to the Rothschild's and his real name was Springstein. As a BAR attourney he did not qualify in any seat of government and like Hamilton and Obama his name and lineage was kept secret. He accomplished his job to destroy the constitutional government and bring about the power of central government that the money men and BAR attourneys could take control.

Today the public service corporations which include towns, counties and states are all franchised to the District of Columbia's United States Corporation owned by the Federal Reserve.

Thank you\ for your comments. You hit the nail on the head. Lincoln wanted a big strong central government like Hitler, Stalin and Mussolini.

I kinda liked Andrew Jackson--he was the ONLY president ever to stand AGAINST a Central Bank running this country---and in contrast to his view--Congress ABDICATED their authority over our banking system and money to a CABAL of private socialist bankers called the "Federal Reserve" under the first KING of progressives, Woodrow Wilson--the "daddy" of the income tax and Fed Reserve. As for FDR--he was KING OF COMMUNISTS in the U.S.--he might as well been registered as a FOREIGN AGENT for Moscow and Stalin.

Even the worst tyrants did a few good things. Just because a bad person occasionally does a good deed doesn't excuse them of all of their crimes. Andrew Jackson's treatment of the Native Americans was absolutely deplorable. He stole their valuable land in the south and gave them nearly worthless land in the west.

Keith, the Federal Government has LIED TO ALL OF US, FROM DAYS OF THE FOUNDERS UNTIL TODAY. They didn't keep Treaties with Native Americans--who by the way--KILLED each other in Indian wars as much as died in wars against whites. Federal government has STOLEN our incomes, property, heritage with their policies and CHILDREN with their indoctrination centers called "public schools" which USED to teach instead.  IF you research enough, you'll find that since BEGINNING of mankind--ONE race, group, country or religion has tried to dominate or conquer others, THAT is the history of man. The more radical the conqueror, the higher the deaths and destruction. P.S.--Ulysses S. Grant sent Custer into Montana to take over the Black Hills to PROP UP post war government with GOLD from those territories--westward expansion intended to eliminate the Indians if they weren't willing to relocate to reservations. Abraham Lincoln personally HUNG 39 Indians during the War for Independence--1862, General John Pope was sent to Minnesota to put down Indian uprising. Pope sent a message to Lincoln that he wanted to EXECUTE 300 warriors after stopping them from hostile actions. Lincoln needed VOTES from whites--so he "picked" 39 prisoners and they were EXECUTED--Lincoln CARRIED Minnesota in next election at EXPENSE of Indians, the ONLY President ever to order a MASS execution. ("Lincoln and the Indians", Univ of Missouri Press, 1978, page 117, David Nichols).