The Pledge of Support

"I Pledge to support The Banner of Peace, for the People of the united states on America, And to the Peacetime, Constitutional Republic for which it Stands, One People, under God, One set of Souls, Standing On their mutual agreement to have Order and Sovereignty over their lives; and Liberty and Justice for All."

This is the Peace-Time Banner 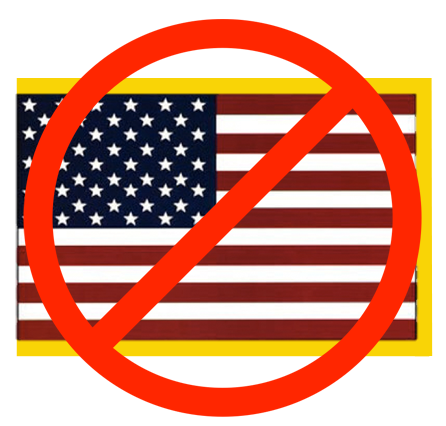 This is The Wrong Flag

Permalink Reply by Donahue Wait on June 8, 2016 at 5:04am
I read somewhere that the US flag is technically a warship flag. I know we are under Admiralty or Maritime Law in our country. The original US flag Betsy Ross made was entirely different.

Speaking of Admiralty or Maritime Law a ship is 'Birthed', baby's are Birthed' as well. Our original 'Birth Certificates' are stored in the Federal Reserve Banks and used as collateral for a bankrupt country.
America was declared 'Bankrupt' in 1933 when Roosevelt was office. He had Americans turn in their Gold, from what I've studied.
Just say'in.(:

I took a pledge to serve and protect this Country and the flag of this country and that's the flag I will protect. We are not by far at peace. Not here in the States or overseas. Why would we pledge to a Lie?

Allegiance is a promise to one's Country and Faith to stand strong and protect againist our enemies. Our flag may be under attack, but the colors do not run downward. They still fly strong and level. As for the first flag made in war time it first was flown on a pole in Philadelphia, Pa., not on a ship.

Our laws came from the Holly Bible; compiled by Men of Faith. History has been changed by those wanting to turn their backs on the Creator and because of the betrayal on Him, He too has turned the American people over to their own caused enemies.

This is the flag that flies at my home .

Some people need to step back long enough to learn the truth and think about what they are saying .

The American flag above crossed out is the flag we have pledged allegiance to for our entire lives. In order to make people comfortable with our mission, it might not be a good time to cross out the bars and stars we have come to know and love. The sight of that made me uncomfortable.

If the other design was meant to be our peacetime colors, then so be it, but we are at war today anyway. And will we not always be at war with evil political intentions? Maybe, maybe not, but it is today that matters!

Why I no longer say the "Pledge"

I – the human being, a creation of the Almighty.

Pledge - a solemn promise or agreement to do or refrain from doing something.

To the flag - A flag is a piece of fabric with a distinctive design that is usually rectangular and used as a symbol, as a signaling device, or decoration

Of the United States of America – supposed to be a federation of constitutional republics united under a general government of specifically enumerated powers – Today, the United States is a corporation and the president is the CEO – this is why government thinks that it “owns” you, and all you possess or produce. Do you think you actually “own” anything? Try not paying your annual government “fees” on your existence (job), home, or your automobile and you’ll quickly discover that you don’t “own” anything and you have absolutely no “rights” or opportunity for justice (in the traditional sense). How is it that artificial “persons” (corporations) are “allowed” to deduct the cost of nearly every expense in existing (depreciation, rents, utilities, salaries, wages, cost of money borrowed, etc.) and real, live human beings are “allowed” virtually no “deductions” at all? Why can’t people “deduct” their costs for shelter, food, clothing – the very expenses that allow us to work?

And to the republic for which it stands - A republic is a form of democracy in which the people, or some significant portion of them, retain supreme control over the government, at least in theory, and where offices of state are not granted through heritage. The constitution guarantees that every state is a republic, therefore the USofA is a federation of republics (nation-states) under the original construct of our system of government. Do we actually retain any control over government anymore? It should be clear to anyone that raises an issue with their “representatives” that we are most often ignored, leaving us (supposedly) with the power of the “vote”. Do we even know if our votes are actually counted or are the results already defined and the minor and subtle changes that happen every two years are just to provide the appearance that we are in control? It’s not who votes that matters, it’s who counts the votes.

One nation - a community of people who share a common territory and government; and who often share a common language, race, descent, and/or history. The USof A is not a "nation", we are a federation of nation-states. Under our original construct, the general (federal) government had virtually no interaction or relationship with the people of the several states. Money for the operation of the general government was budgeted in advance and the funding was allocated among the states based on the population of the states (Direct taxation through apportionment). Today, the federal government exacts directly from the people and then doles out the funds exacted to the several states, exactly OPPOSITE from the construct of taxation established by the founders in our constitution. This makes the several states completely dependent on the “generosity” of the federal government – in direct opposition to the initial construct.

Under God – This was added in 1954 to make this Fabian-Socialist creed initially written in 1899 (no surprise that God was left out of the original version) more palatable to the general population (who were largely people of faith), and to continue the subtle brainwashing that “government is good” and we should all be loyal and obedient serfs to our masters/rulers.

Indivisible - not divisible; not separable into parts; incapable of being divided.  Is this our design? Were we not fifty (50) separate republics, each defining our own laws? If we are “indivisible” how can one thing be lawful in one state and not another? Indivisibility implies uniformity yet it is clear that there is no uniformity among the several states – what is “legal” in one state may not be so in another. How could “liberty and justice” within an “indivisible” entity not be uniform within the borders of this monolithic structure? Are there not separate and distinct governments in each of the several states or are these just local branch offices of the authority in DC?

With liberty - freedom from arbitrary or despotic government or control.  Does “liberty” exist within our federation of states today? Can you refuse to participate in Socialist programs without consequences? Can you extract yourself from Social Security? Can you move freely in and among the several states and travel without permission (licenses)? Can you build or modify on your own land without permission (permits, licenses, inspections, fees)? Are we not reaching the stage where we need some form of “permission” from some entity of “government” to do virtually anything? Are private enterprises allowed to exist without licenses, permits, fees, inspections, etc?

And justice - Justice is a concept of moral rightness based on ethics, rationality, law, natural law, religion, fairness, or equity, along with the punishment of the breach of said ethics. As the “judicial” system has so aptly demonstrated over the past decades, there is no equality in our “justice system” anymore, merely a charade to preserve the “perception” of justice. Government may now take your land to give to a private developer (Kelo v. New London), they may make warrant-less entry into your home based on the “suspicion” of a “law enforcement” officer, etc. Do you actually have any recourse when the heavy hand of “government” bears down on you for believing that you are a free and sovereign creation of the Maker of All Things? Do we not see, every day, the continuing encroachment on our freedoms and the inability to have our grievances redressed?

For all – the whole number of…  Clearly, this is no longer the case within our borders. Elites get away with murder and the average human being is subject to abuse by any and all people who declare that they are an “official” of “government”.

For those interested in the author of the "pledge" - look here:

Given the above, will you continue to “take the pledge”???

The link is not working!

The link does work and takes you to the history of the pledge.

The Domain "oldtimeislands.org"  has expired or is pending renewal guys. That's what's wrong.